skip to main | skip to sidebar

East of Bluffton, MN-July 15, 2006-With a new found determination and a budding idea of how to accomplish what I was trying to do, I rose early on Saturday morning and ventured west with a plan more detailed than "Find a train and take a picture". I knew of a curve between Wadena and Bluffton that should present eastbounds in nice light early in the morning. Of course I had no way to know what was coming or when it would show up but I figured if I kept the windows open while parked at the crossing I would be able to hear horns a couple of crossings away and have plenty of time to be ready for whatever came.

I had probably waited for no more than 5 minutes before I heard a horn in the west which immediately got my attention. Here was my big chance to take a good picture, maybe even something I would proud to share with the world via the internet. I established my postition, popped the lens cap, and switched on the camera. The next few moments seemed like hours as I waited to see what would come into view as I tried to calm my nerves and decide how much zoom I would use for this shot.

Within a minute I saw a headlite in the west but was not able to identify the locomotive. I zoomed in as far as I was able and thought it was funny looking locomotive. As it came nearer, I realized that unbelievably the first train I was going to shoot with a plan was the eastbound Empire Builder, the Amtrak passenger train that was scheduled to pass through Wadena at about 3:00 AM daily! I had spotted this train in daylight only 2 or 3 times before during my 2 years in Wadena and now it filled the viewfinder of my camera. 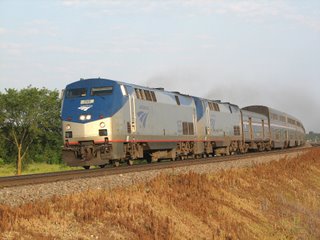 I was so startled I almost forgot to press the shutter button, but I finally remembered. The experience had a lot of similarities with sitting in a deer stand listening to the brush crackle as a critter approached. There was a definite adrenaline rush.

I wanted to leave right away to go home and upload the image to look at it on screen but I convinced myself to hang around for a while to see what else showed. I caught another train a bit later led by GE C44's, and thought that was enough for the morning and headed home.

I immediately cropped and sharpened and submitted these pictures and learned something else about the rp.net system-the waiting is that hardest part. Now that I had a picture I thought might really make the cut I was on pins and needles waiting for an answer on these shots.

When I got the approval notice I was thrilled and viewed my own photos on the site multiple times that day. Lots of pride, and now there was a desire to take more pictures and get them accepted. I was about to become a telemasher.
Posted by Jim at 6:21 PM

Jim
Please click on the photos for a larger image.